Science is a serious business. The search for knowledge requires dedication, patience, and rigorous analysis of the facts. When the hard work is over and a new entity has been discovered, a scientist gets to celebrate the crowning moment of his achievement by putting a name on what he has found.

For most scientists, this means thinking up a profound or descriptive name that will be recognized across the world. For some, though, it is a chance to be playful after years of serious study. Sometimes, a name just happens to be hilarious.

Here are 10 of the funniest names you’ll find in the annals of science.

The thrush family of birds never really had a chance when it came to their names. For starters, thrush is the common name for a yeast infection in the genitals. But long before the English language played a dirty trick on the thrushes, the Romans had labeled them with another. To a Latin speaker, a thrush was called a turdus.[1]

When Latin-loving scientists decided to create the binomial method of naming animals, they stuck the name Turdus on all thrush birds. This has led to some now-amusing names like Turdus ignobilis, but there is one bird that got the worst label of all. The Tibetan blackbird is rather large, so what would you call it but Turdus maximus? 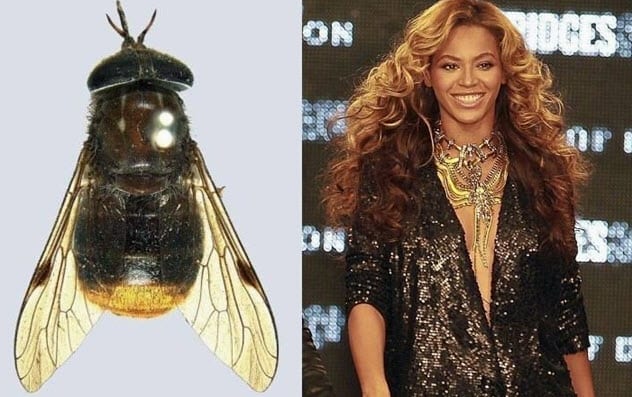 Taxonomy, the naming and classification of species based on their supposed relationships, is usually considered a dry and arcane subject. However, those who spend their time studying species can use their power of naming to raise public interest in their work. Naming a species after a famous person is usually good for a few articles in the press—even if the associated person is not always thrilled by the animal named after him or her.

In 2011, when researchers described a rare fly discovered in 1981, they took note of its most notable feature and worked out the perfect name. This fly has a glorious set of golden hairs on its rear end. You could say it was “Bootylicious.” Taking this as a sign, the researchers named the fly after Beyonce, who also shares a birth year with the discovery of the fly.[2] 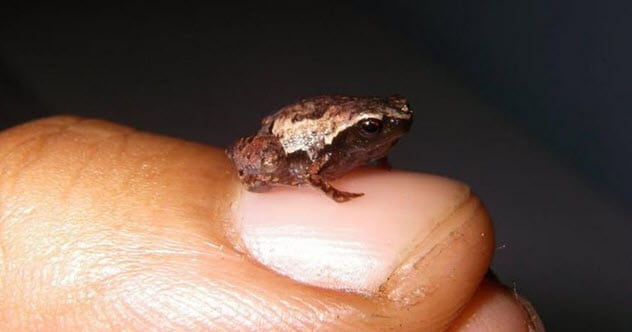 The smallest vertebrate in the world is a frog called Paedophryne amauensis. When fully grown, it is a minuscule 7.7 millimeters (0.3 in) long and could comfortably fit on your little fingernail. Faced with this tough competition, the three species of frog named in 2019 had to set themselves apart in the world of small frogs somehow.[3]

Searching through the vast Madagascan jungles for such tiny frogs was just one difficulty. Once they had been tracked down by listening for their calls, the frogs had to be studied.

Given that the three new species ranged in size from 8 millimeters (0.31 in) to 15 millimeters (0.59 in), this proved a fiddly job. But eventually, the scientists were sure that they were all new species belonging to a brand-new genus—Mini. So, of course, the researchers named the frogs Mini mum, Mini scule, and Mini ature. 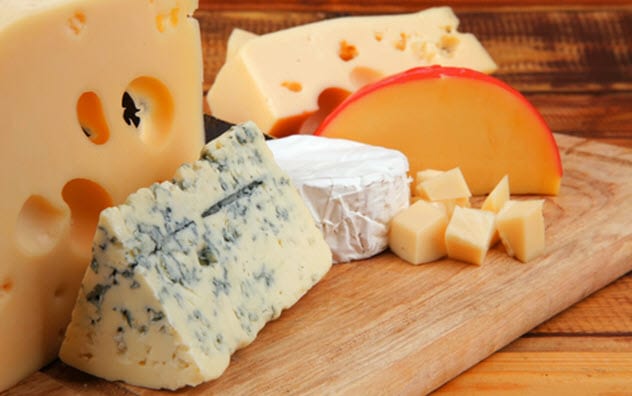 Chemistry is known as the smelly science—and for good reason. Working in a lab can be an assault on your senses, ranging from the subtly pleasant to the downright noxious. In earlier centuries, the sense of smell, and sometimes taste, was the best way to distinguish different compounds—though licking chemicals today is frowned on. But some chemicals still bear the names of their smells.

The polyamine group of chemicals have strong odors, and their names match this trait. As their names suggest, putrescine and cadaverine are some of the chemicals that give rotting meat its smell. As for spermidine? It smells as you might imagine.

Spermidine is not only found in male ejaculate, however. It is found in foods like aged cheese, and some studies have shown that it can help fight liver cancer. Swallowing this may be good for your health.[4] 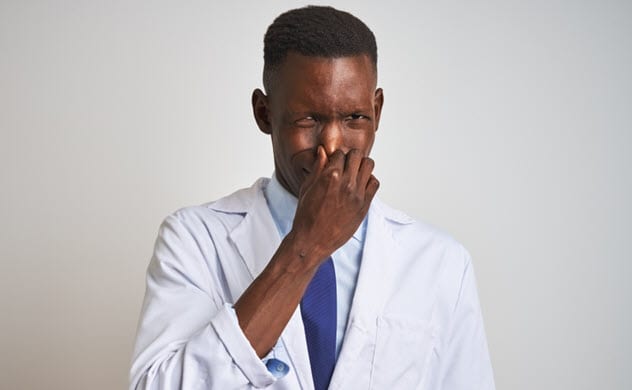 If you name a chemical using the agreed international standard, you will be able to picture it precisely from its descriptive moniker. However, these names can be so long that they are unwieldy. So scientists give the substances nicknames.

When one group of researchers synthesized a new chemical, they must have celebrated and forgotten to close the window. During the night, a pigeon flew into the lab and left droppings everywhere. They took this as a sign and nicknamed the chemical “cristane” after “crissum,” the anus of a bird.

Arsole has a more prosaic etymology. A chemical known as phosphole contains a phosphorus atom. After that atom was replaced with one of arsenic, the researchers simply added that to the name instead.

Although arsole has not been purified, scientists have created a group of similar molecules, all of which are arsoles. There is no reliable report describing the smell of an arsole.[5] 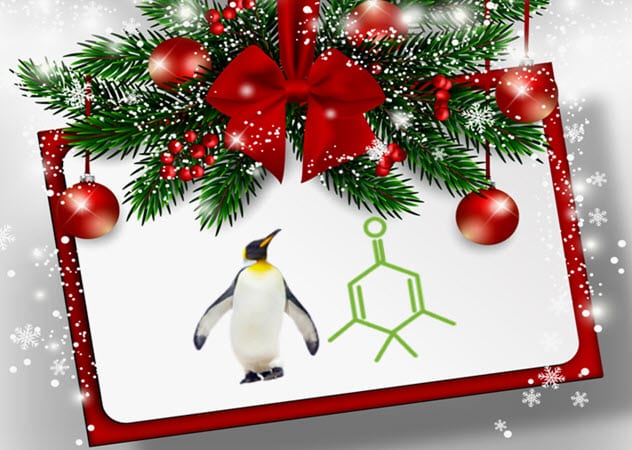 3,4,4,5-tetramethylcyclohexa-2,5-dien-1-one does not really roll off the tongue. For a chemist, this name conjures up an image of a ring molecule with various appendages. For the nonscientist, however, the name probably doesn’t mean much. But give the compound the name penguinone, and you can probably guess what it looks like.[6]

There is no known use for penguinone yet, but it does at least give chemists something to put on their Christmas cards. 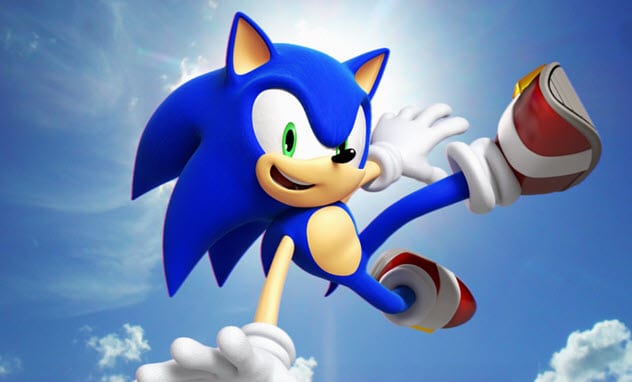 What does SHH make? Sonic hedgehog.

Sonic hedgehog is the name given to the protein made by SHH. When researchers knocked out several related genes in fruit flies, they noticed that the animals developed short, spiky hairs—a bit like a hedgehog’s bristles. So the genes were named after hedgehogs—like the Indian or desert hedgehog. One researcher decided not to name his gene after a real animal and went with Sonic the Hedgehog.

Not every scientist was pleased by this name. “It’s the kind of idea that you talk about in a pub and say, ‘Wouldn’t it be funny if we named it Sonic?’ ” said one researcher. “But then you don’t do it.”[7] 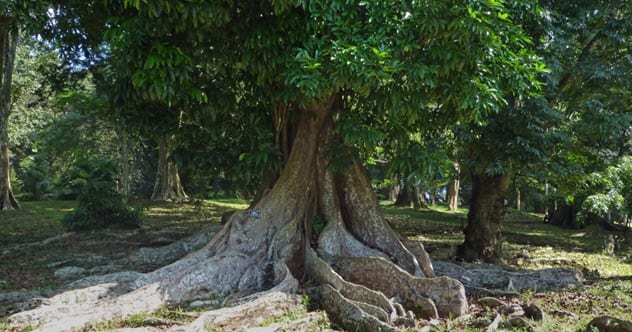 Naming a chemical from its source is a common way of distinguishing compounds—as spermidine showed. What else would you call an acid derived from a tree called Mora except moronic acid?

Moronic acid is not as stupid as its name may suggest. Studies of the compound have found that it may be a powerful agent against HIV and herpes.[8]

Moronic acid is not the only humorously named chemical derived from a plant. When naming a compound purified from the plant Vinca pubescens, researchers decided that pubescine was a perfectly normal name. 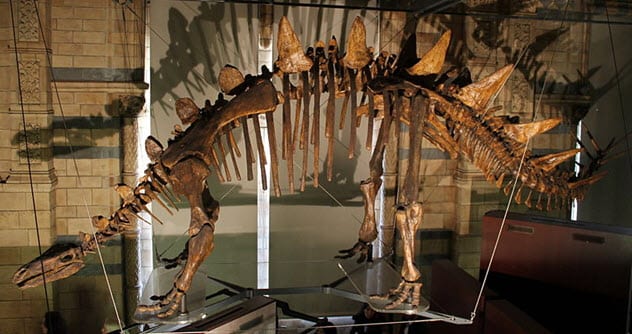 Tuojiangosaurus is a genus of herbivorous dinosaur that looked like the North American Stegosaurus. Living around 155 million years ago in China, Tuojiangosaurus was an early relative of the stegosaurs that would later evolve. Despite being an early ancestor, it had already developed a four-spiked tail used for defense against predators. Let’s hope it also had a well-developed sense of humor.

Tuojiangosaurus may not strike you as a funny name at first. However, next to a near-perfectly preserved skeleton, the Natural History Museum in London gave the pronunciation of its name as “Two-wang-oh-sore-us.” Little is known about the dinosaur’s genitalia, but it is unlikely to have had two wangs or to have been sore about it.[9]

Since then, the scientific community seems to have realized its mistake and changed the pronunciation guide on most websites to “too-YANG-oh-sore-us.” The physical sign in the Natural History Museum remains unchanged. 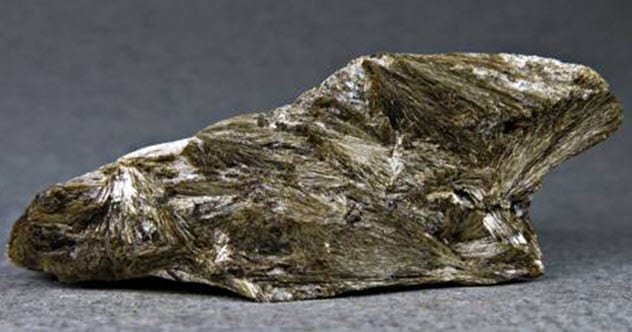 There is no higher honor for a mineralogist than to have a mineral named after him. Each year, the Commission on New Minerals and Mineral Names at the International Mineralogical Society grants the names of around 40 new minerals as they are discovered.

This process ensures that new minerals are not given the same name as one already discovered. When colleagues wanted to name a mineral after the mineralogist Paul Moore, it was discovered there was a mooreite already on the books. So paulmoorite was born.

Most minerals will end up with the names of their discoverers. That’s how you end up with jimthompsonite, but that’s not how cummingtonite got its name. Discovered in Cummington, Massachusetts, this mineral is usually found in the form of slender crystals. It has also become a favorite chat-up line for geology students the world over.[10]