Art of Leonetto Cappiello: The Father of Modern Advertising

The tail end of the 19th century is called “Belle Epoque”. The Boulevards of Paris have never been more exciting to walk. The hustle and bustle of the city on the cusp of the Twentieth Century is an interesting place to be. Theatrical Actors, Musicians, Dancers, Artists and Singers all flock to gay Paris. The cafes and restaurants are world class. The public are hungry for new tastes and talent.

At 23 years, a young Italian from Livorno arrives in Paris, wide eyed and wonderstruck. He has no specific plan in his mind but he does love to draw.

A self taught artist and caricaturist, his portfolio is bulging with his own mini masterpieces he had created since the age of eleven. Born of simple lines and brief splashes of watercolor, these were painted at the pleasant seaside hometown of Livorno, perfect for lazy strolls and alluring subjects.

His brother works for the Stock Exchange and had sent back word about the gaieties of Paris. The young man only wanted to spend a month in Paris, sight seeing and enjoying his brother’s company. Instead, Paris conquered him and he in return conquered Paris as one of its most famous caricaturists and poster designers.

Portrait of an Artist

Leonetto Cappiello was born in the seaside town of Livorno, Italy on the 9th of April, 1875. He was interested in art early on and started painting and sketching as a child.Mainly self-taught, he never really had any formal art training.

The transient population that visited the seaside inspired Cappiello to create caricatures. On leaving university, he published a modest album in 1986 called ‘Lanterna Magica’ about the cream of Livornian society.

Leonetto’s brother Oreste was by now working in Paris stock exchange. It was an opportunity too good to miss. Leonetto travelled to Paris in 1898 to visit his brother and enjoy the sights and sounds of Paris for a month. He hadn’t yet decided what he wanted to do with his life and career.

Initially Leonetto amuses his brother’s friends by sketching their caricatures at the office parties. He realises how his talent created instant social acceptance and spends many an evening enjoying himself. Briefly returning to Livorno to mourn his father’s death, he soon goes back to Paris as the allure of Parisian life is too good to resist.

Strolling the boulevards aimlessly is a pleasant preoccupation for Leonetto. It is during one of these strolls that he meets Puccini, a fellow Tuscan. Puccini, who by now is the toast of Paris due to the success of “La Bohème” is known to the Cappiello family.

Delighted to meet a fellow countrymen, Puccini takes Leonetto for a drink in the nearby cafe, chatting amicably about various themes. He then asks Leonetto what he wants to do with his life. Perhaps embarrassed at not having thought about a profession, Leonetto talks about his passion for caricature. In a moment of inspiration, he asks Puccini whether he would pose for a caricature so that he could capitalise on his recent success and submit it to a magazine.

Puccini ( along with another fellow Italian, the actor Novelli) agrees to this enterprise.

Few days later, Leonetto Cappiello submits the two caricatures to the then hugely popular satirical weekly, Le Rire. He doesn’t even speak to anyone at the newspaper office and just drops the drawings off. Much to his amazement, the editor accepts both the drawings for publication. Cappiello is delighted to see them both appear in the issue. This was July,1898.

The caricatures were so popular with the readers, Leonetto Cappiello became an overnight sensation and the ‘go to’ guy for caricatures in the Parisian theatrical society.

Toast of the Town

Arsène Alexandre, director of Le Rire, hires Leonetto immediately into his artistic team. Cappiello starts to draw many of the famous actresses of the time: Sarah Bernhardt, Yvette Guilbert, Jeanne Granier and many more. The previous artists had created caricatures more as a fun piece, often exaggerating certain features for amusement. The subjects weren’t always fond of such treatment and the readers were also getting tired of this style.

Cappiello’s gentle style that captured the spirit of the person, without distorting them, was a much welcome change that was mutually accepted by artist, subject and the reader. Soon all the popular publications of the time were clamouring for Cappiello’s artwork ( Le Cri de Paris, La Rampe, Le Journal, Le Figaro, Le Sourire etc.)

Capitalising on this success, Cappiello published his collection of caricatures of Parisian actresses called “Nos Actrices” in 1899 by La Revue Blanche.

In 1902 he published “Gens Du Monde” a 24-page book of his caricatures, for the magazine L’Assiette au Beurre.

In 1903, another popular collection, “Le Théâtre de Cappiello” was published by the magazine Le Théâtre. This gathered together 33 of Cappiello’s popular drawings of theatrical celebrities.

At that time in Paris, poster artists were in very much demand. The famous posters artists such as Henri Toulouse-Latrec, Alphonse Mucha, Jules Chéret and Théophile Alexandre Steinlen adorned the lampposts and cafes.The big poster boom started in the 1850s and steadily took over the Parisian scene. Magazines, newspapers, theatrical releases, night clubs, alcohol, confectionery all needed advertising.

The artists of the time simply translated their prodigious skills to their posters, showing off their gifts in intricate drawings that were to be admired by the passing pedestrian. In the days of horse drawn carriages and boulevard strolls, these posters were much admired but were perhaps getting a tad stale.

The people who admired the art weren’t always able to recall the product. The message was getting lost among the frills.

Fast forward the beginning of the 20th century and the advent of motor cars meant the passengers zoomed past these posters, not having enough time to admire the artwork from close proximity.

The industry was looking for some new ways to lure the public. While the demand for artists was undiminished, the printers were keeping an eye out for new talent. Enter Leonetto Cappiello.

The Revolutionary Ideas of Cappiello

Cappiello had already designed a poster for the French Newspaper Frou- Frou. this caught the eye of a printer Pierre Vercasson. The latter invited Cappiello to work for him. Many clients would approach Vercasson for poster work and he commissioned artists to work for him. The commissions may pay as high as 500 Francs per poster design.

Leonetto Cappiello, who had already garnered much interest and accolades for his caricatures, was lured to design posters. This was the beginning of a new era in poster design and in many ways the beginnings of modern advertising principles.

The intensity of color meant that the posters were identifiable from longer distances and were eye catching even from a fast moving vehicle.

The separation of a bright foreground image set against a background of a darker shades meant the images sprung out to meet the eye.

The composition brought the eye to the single memorable image, rather than being too busy with artistic frills.

The sense of movement or ‘arabesque’ showed Cappiello’s theatrical origins and captured dynamism.

By contrast, sometimes Cappiello opted for a single iconic image, sometimes static, sometimes in movement, that often formed the ‘logo’ and gave the product it’s identity

Cappiello further enhanced the iconic status by giving the image an unusual color : A green Devil, a Red Horse, A Blue Tiger – these delirious dream like figures made the posters even more memorable.

The use of celebrity caricatures perhaps is the first example in advertising of associating a celeb with a product.

Unlike others Cappiello constantly rediscovered himself and changed his style to keep the public attention. There are three distinct phases in his artistic career, already an innovator he was keen to stand out from the crowd. When his initial concepts were soon copied by others ( everyone was trying to imitate a Cappiello style poster!), he moved from Caricature style to a Fantasy figurescape and then to a more ultramodern and iconic approach.

Once seen, never forgotten, Cappiello was a man before his time. His modern concepts on the use of color, movement and visual surprises still hold ground in today’s world of technology. He was a prolific talent and an industrious worker producing over 3000 posters ( difficult to keep track of) Many of which are immensely collectible.

He did create other designs and portraits on odd occasions but he is best known for his work on Poster design, unsurprisingly.

The Father of Modern Advertising

There is no doubt that Cappiello revolutionized the advertising industry. His ideas continue to be the mantra of modern advertising. He moved away from ‘showing off’ artistry to focusing on the brand, the product and using his talents to convey the message. The resultant image is seared into the viewers eyes indelibly – what more could an advertiser want?

During the first world war he served as an an interpreter in his native Italy.

The much loved Cappiello died in 1942 in Cannes, his love for France and Paris undiminished.

Life and Places of Cappiello 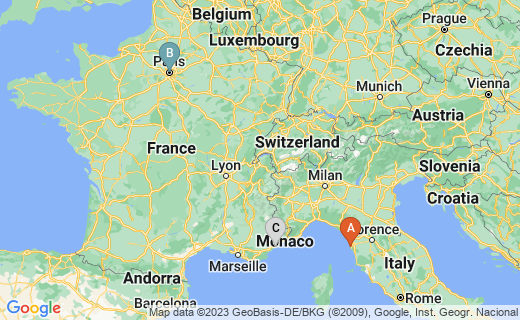 Cappiello’s workplace for most of his career

Where Cappiello dies in 1942